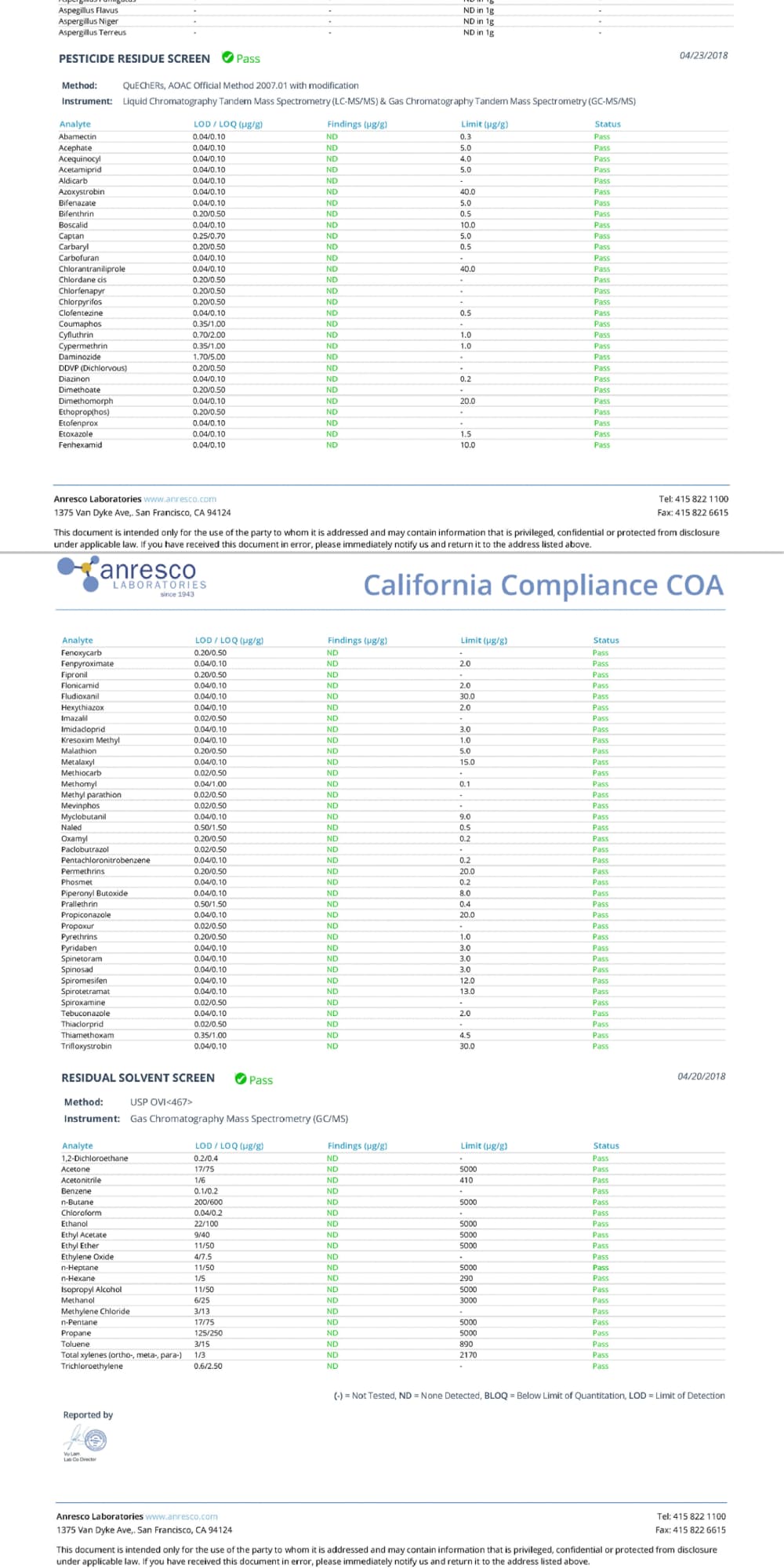 What is the difference between Full Spectrum and Isolate?

A CBD isolate is a pure, isolated CBD compound that has been removed from the hemp plant. It is extracted by using an ethanol (drinking alcohol) extraction method and is a white powder that is tasteless and odorless. CBD isolate contains no THC and is best for someone who absolutely cannot risk testing positive on a drug test. (Note: While testing positive for THC in a drug test by using full spectrum (with <0.3% THC) is rare, it is possible)

Full spectrum contains other active plant compounds called cannabinoids, as well as CBD. Those cannabinoids include CBN, CBG, and CBC as well as aromatic cannabis terpenes which give it the “green, planty” taste and smell. It contains the maximum level of THC, 0.3%, allowable to be legal in all 50 states in the US. The interaction between the THC and cannabinoids within the human body is also believed to cause an entourage effect which helps maximize the therapeutic effects of CBD oil. A large part of alternative medicine revolves around using the entire plant for medicinal purposes.

Everyone responds differently to each form, the only way to know which works best for you is experimentation. Each oil is mixed with MCT coconut oil to make it easier to use in a dropper bottle

Where do you source your (Non-CBD) ingredients?

What extraction method do you use?

We are proud to source all of the CBD in our products from Oregon and Colorado.
We use a CO2 method to extract our CBD.

Cannabidiol, also known as CBD, is found is found in the resinous flower alongside more than 80 active cannabinoids (chemical compounds) in the Cannabis sativa plant.  One strain of the sativa plant is known as industrial hemp used to make CBD oil.  With roots traced to 2700 B.C., CBD has been used for medicinal and natural remedy purposes for centuries. This is because of how the plant interacts with the endocannabinoid system—a modulatory system that balances the body during stress.

Unlike tetrahydrocannabinol (THC)—the other primary and most known cannabinoid in cannabis—CBD doesn’t alter your mind or cause a psychoactive reaction. In other words, using CBD won’t get you high or have intoxicating effects.

Yes, purchasing CBD is federally legal as long as it doesn’t contain more than 0.3 percent THC, but some state laws have put restrictions on buyers. We do currently ship to all 50 states, but please do your research and make an informed choice. The FDA is also currently evaluating CBD’s safety. For now, its stance is that products that add CBD to food or label CBD as a dietary supplement are not legal for interstate commerce.

How much CBD oil should I take?

Dosing is a highly individualized process which is influenced by many factors. Each person’s optimal dosage is based on a variety of factors, including body chemistry, genetics, weight, and physical condition.

It’s always recommended to start slow with a very low dose. Patience and persistence are key. It is not uncommon for a person to see results several days to weeks later. The effects may also be so gradual that you do not notice. Starting with too high of a dose may cause your body to react poorly. You may experience side effects such as headaches, nausea or worse symptoms. Please visit the resource below for a more in-depth article on dosing including a CBD dosage calculator.

What is the recommended way to consume CBD oil?

When deciding the best way to consume CBD we must considered bio-availability which is the absorption rate of CBD into your bloodstream. The easiest and most readily available way to take CBD is sublingually, which means holding it under the tongue for a minute or more before swallowing. This method allows the mucus membranes of the mouth to absorb the CBD, bypassing the digestive system and liver completely therefore reaching the bloodstream faster.

What is the Endocannabinoid System (ECS)?

Discovered less than 30 years ago, the endocannabinoid system (ECS) is a molecular system responsible for regulating and balancing many processes in the body such as immune response, communication between cells, appetite and metabolism, memory, stress and emotions, motility, fertility and more. It was named after the plant that led to its discovery. The ECS keeps our body in balance and directly correlates to our health by keeping conditions in our cells just right to work optimally. When this system is out of balance you can have headaches or more serious diseases. There are two primary kinds of receptors in the ECS: CB1 and CB2. CB1 receptors are mainly found in the main nervous system and our brains, and CB2 are normally found in the peripheral nervous system or nerves that branch out from the brain and spinal cord and extends to other parts of the body including muscles and organs. CB1 receptors are one of the most abundant receptor types in the brain. These are the receptors that interact with THC to get people high. CB2 receptors are more abundant outside of the nervous system, in places like the immune system. However, both receptors can be found throughout the body. The plant cannabinoids found in CBD activate the same receptors as the human endocannabinoids.

What is the difference between Hemp and Marijuana?

Cannabis is a family of plants with two primary classifications – Indica and Sativa. While marijuana can be considered a member of either the Indica or Sativa families, Hemp is a member of the Cannabis Sativa family. Because Hemp and Marijuana both derive from the Cannabis Sativa family, they do share certain similarities; however, due to each plant’s biological structure, they have several very distinct and crucial differences. Cannabis contains a variety of different compounds called Cannabinoids, two of the richest and most dominant are Tetrahydrocannabinol (THC) and Cannabidiol (CBD). Both Cannabinoids have shown to provide profound benefits to the human body; however, THC induces psychoactive effects (gets the user “high”), while CBD does not contain any psychoactive properties.

Join Waitlist We will inform you when the product arrives in stock. Please leave your valid email address below.
[]